There are many reason why peers do this work, I will be asking people to join me as this site develops and include some words in their first post to show why they are involved as a peer.

The reason I do this is because it was not until 1992 when I became a member of the BAD club, this involved receiving a correct diagnosis of BiPolar Affective Disorder, getting onto treatment that included a range of medication and information about the changes necessary to my hectic lifestyle.

The reason I am still involved in 2016 is that I have discovered that a lot of the issues that impacted on my family had been well documented over a long period of time. I became aware of the consumer movement through being sent to the 1996 Brisbane TheMHS Conference by Hunter Health to find out about consumer participation with three other consumers. The 1996 TheMHS Consumer Day was looking at forming the inaugural Australian Mental Health Consumer Network an event that had a huge impact on me and the thing I picked up from there was that there were a lot of other people who had experienced similar treatment at the hands of the mental health system who were not happy and wanted to see the system change to a more person focused model of care – now called Recovery

I have included a number of the reports that show how a range of people that have been working to change the system over a long period of time in Australia. 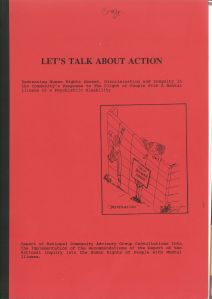 The History of the Lunatic Reception Centre in Darlinghurst

A History of the Lunatic Reception Centre in Darlinghurst

The Kit: The Advocacy we Choose to do 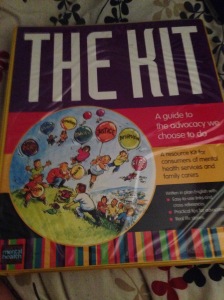 3 thoughts on “Why do peers do this work”